70's inspired manicures are so in right now. I fully believe Cher was a 70's (and 80's and 90's) ICON so I had to include Cher's name somewhere in here. The 70's would be nothing without flare bell-bottoms. Alas, we have the Cher Flare press ons. This set comes with loads of fun colors. Mix and match the colors to your preference!

The Twinkled T Stay Pressed line was tested over the span of a year for durability and wear-ability. With proper care, the Stay Pressed press ons will last 2 weeks of wear. Use our Premium Nippers to clip or Glass Files to shape the press ons into your desired shape.

I loved this press one in every way. They are durable, high quality and the perfect length for a student who needs to do a lot of work. Definitely worth the money and I love the other designs as well! Will 100% re-purchase in the future.

These nails live up to expectations. They're strong and durable, and so is the glue. I will say definetly look at the tiktok/reel to get best results. Also, be sure to measure out nail sizes before gluing to ensure best stick--if theyre even a little too big, they will come loose much easier. Mine lasted nearly 2 weeks, with a few that popped of (mostly my own fault), but they certainly performed wayyyyy better than drugstore brands.

Cher Flare is absolutely stunning so beautiful and easy to do things with. I love the colors and shape, the quality is spectacular just like the other press ons. Definitely recommend these especially for the summer. I’ve had so many compliments from my friends and family. I just started school and these are so easy to write with and type on my computer and they are just so pretty to look at🫶🏻 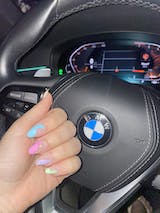 M
Melissa Robinson
So many compliments!

Okay so this is going to be kind of a weird review...I love this particular design and have been a fan of Twinkled T's press ons but just haven't taken the time to write a review.

I recently had to go to the ER and ended up getting admitted to the hospital while wearing my press ons. Part of my evaluation by the doctors and nurses had them messing with my hands and fingers and I'm not exaggerating when I tell you that I received so many compliments on my nails!!! I mean they aren't wrong, they are lovely, cool, pretty, beautiful, neat, colorful, so unique, and other things I can't remember but all positive. What's more, my nails stayed on thru all that handling thru all my hospital stay. Pretty impressive!! Had to pass that on, because I was feeling very proud of you, Twinkled T, and maybe I sent you a few customers too. I sure tried!!!

Okay, background first: I have large hands, I've worn press ons throughout my life for various reasons and events, I am a writer and I type a lot, and I'm always using my hands for something (washing dishes, gardening, typing as mentioned before, browsing tiktok...). I also had an incident with a nail salon that overfiled my nails and left them brittle and in pain, and I was still in the middle of growing out that damage when I put these nails on.
My last pair I wore were the My Only Vice press ons, and that was pretty fresh from my overfiled salon nightmare, so I was having some issues with general pain and tightness that had nothing to do with the nails themselves, but my own damaged nail beds.
My nails had healed enough that when I put these on, they felt so good and so natural that I forgot I was even wearing them. They are such a good fit. They're the kind of weighty you look for in a quality press on, but they aren't so heavy that they're hard to wear.
I also want to add that I went down a steep cliff in these, trying to get to a beach my partner picked out. I had my hands on the cliff as I'm scooting down the side and I swear to you: even after I scraped my hands on the way down, and had to climb up on the way back up, these nails stayed PUT. They were not going anywhere. These are strong. They do not mess around. Put them through their paces, they'll stay there.
I also pick at my nails a lot due to ADHD and just general stimming, and they were not going anywhere.
That's what I want you to know most about these nails: they're not going anywhere once you put them on. The Twinkled T sisters put up a couple of reels on their Insta page to help with putting them on and making sure they last, and those tips did have a big impact on the nails staying on. You should be putting glue on both the press on and your nail bed, and make sure you find the right size for your nail, because if it's too big, there will be a gap and that will affect the integrity.
Both this pair and the last pair I had on, I purposely removed them myself, and I wore them two weeks each.
The only downside I could even think of had nothing to do with the nails but with me: since I pick a lot at my nails, the design started to chip after about a week, which was very sad. I think that's why I liked the Vice nails, since you couldn't really tell quite as much. I want to be clear that the design chipping has nothing to do with the nails, it's all on me since I was picking and biting. And my climbing, that was definitely hazardous to the design.
I'm not personally used to the longer nails, so it was hard to get used to the typing, but I wouldn't trade these for anything. I might maybe file them down but I loved this design too much to do that! I need to learn how to type with the pads of my fingers instead of the tips of them and then I think I'll do better.
I really loved these so much. They looked so good and so chic when I was wearing them. My Only Vice is going to be my top favorite for a while I think, but these are definitely a close second.
Thank you, Liz and Lana, for your awesome work on these!

Let customers speak for us

Best nail files I have ever used!

These are hands down the best nail files I’ve ever owned and used. They are easy to clean, do not need to be cleaned often, and genuinely feel good to use.

It's so cool that y'all offer this as an option for those of us that just want to try out different gels! Super affordable and the variety is great. Formula is very long-lasting!

Look I love Gel Baby, the formula is incredible and I love the twinkled t brand. My wallet on the other hand doesn’t love the price. This is a great way to get the colors you want at a lower price point. Every bottle I have received is minimally damaged and most of the time I have to look to find the imperfections.

i had a bit of trouble with use at first - but i will blame that on user error. i swiped over the cross multiple times with clear polish, when i should have applied it more thickly in one swipe. otherwise, a great product and i highly recommend.

I love them, I'm currently wearing them. It's a fun way to showcase multiple colours, which is my favourite thing to do. They'd probably look nicer on a different colour scheme but should never be faulted for user error

I would loke another colour

I though it was purple but not, it is silver and I would line it in rose gold! My mistake. But is very useful to mix the polishes and do not damage the table or mat, less mess and more clean!

I had some of this tools for years, almost 13 years and I recently adquired a new one, I really like it and recommend this stamper a lot! I hope it will be so good as the old one!

It is so pretty

The brush is so pretry for nails, I think I am going to use it for eyeshadows because it is so pretty and soft!

I use this brushes to ckean up my nails once I finish my designs. this brush is handy, cleans very well. I hope the material will be durable. I use it a lot and after a while I see brush could be damage because of acetone, I think it is normal but I like it very much!

I really like this item, is so useful, I can clean up my stamper immediately. Very useful and clean!

I love this item, I can clean up immediately my stamper no mess, fast and useful! I really lije it very much!

I am so excited to use this on clients! I have a couple white chrome powders but they all have a pink/green/blue tint to them so even over white you get that color coming through. But this one doesn't! It's a nice pearly look that is super trendy right now! Be sure to test it on different no-wipe top coats and on different cure times. Every brand is a little different. I use the TT silicone tool to rub it in, but sometimes a little spot might not want to stick. So I found using my finger works well at getting it to stay put. Great product!

Just as pictured and awesome! Cute and stylish for the holidays.

darker irl than in photos

its silver not white